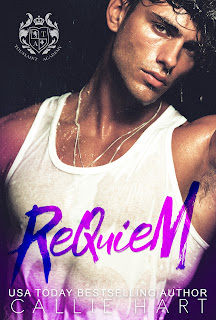 SORRELLHe’s going to pay for what he’s done…Theo Merchant was born into a kind of privilege I’ve never known.He has everything I don’t: Money. A private school education. Popularity. A bright and shiny future, full of success to look forward to. He took the only thing I had going for me—my best friend, Rachel. Now that she’s gone, I have nothing left to loseI will infiltrate his world.I will cradle his worthless heart in my hands.I will burn down his entire life and destroy everything he holds dear.I haven’t enrolled at Toussaint Academy to learn.I’ve come to destroy a monster……and I won’t leave until he’s dead.THEOShe has no idea what she’s getting herself into…Sorrell Voss is intelligent, caustic as hell, and quite possibly the most beautiful thing I have ever seen. She’s also going to get herself f#cking killed.She’s a fool if she thinks I’ll go easy on her just because she’s broken.You don’t venture into the lion’s den and walk away unscathed.She has her secrets. That’s fine.*My* secrets will unravel her until she comes apart at the seams.She will bow to me, and she will break.Then, and only then, will I make her mine.
#REQUIEMRELEASE

Requiem by Callie Hart
My rating: 4 of 5 stars

What a whirl wind story Requiem was! It started off as an enemies to lovers and turned into something entirely different but so much more! I truly enjoyed the plot twist of this story which took me by absolute surprise. Both MCs were wonderful, even most of the side characters were great (in their own unique ways). I adored Theo and his committment and persistance. While I didn't understand the why for the side characters doing what they did and at times felt this was eerily similar to the Riot House stories... overall I found the entire read to be angsty in the best way and it completely sucked me in. Another fantastic read from Callie Hart!