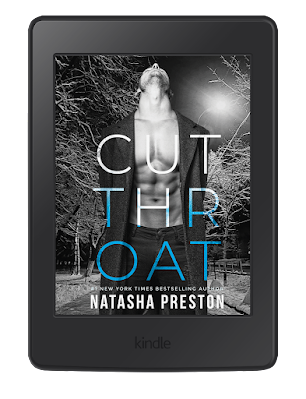 𝐒𝐔𝐑𝐏𝐑𝐈𝐒𝐄 𝐑𝐄𝐋𝐄𝐀𝐒𝐄! 𝐂𝐔𝐓𝐓𝐇𝐑𝐎𝐀𝐓 from #1 New York Times and USA Today bestselling author Natasha Preston   Cutthroat was previously featured in the Scouts dark romance anthology and the novella is now available for only 99 pennies and available in Kindle Unlimited      Purchase here: AMAZON                   𝐁𝐥𝐮𝐫𝐛   It’s been five years since the River Scouts, and Zeke is finally fleeing to a remote snowboarding resort in Italy to escape his troubled past.    Unfortunately for him, trouble doesn’t like being so far away, and it soon chases after him in the form of a seventeen-year-old beauty that he’s not allowed to touch. One look at Nora, and he’s addicted.   Their game starts with watching each other, but it soon takes a murderous turn when Nora punishes Zeke by looking at other men. If he can’t have her, no one can.   As careful as he’s been, it’s not long before cops begin to suspect Zeke. On the night of Nora’s party, the police storm in, and Zeke must
Post a Comment
Read more

Before I let Go by Kennedy Ryan Cover Reveal

"Award-winning and bestselling "powerhouse" author Kennedy Ryan is at her absolute best in this compelling, scorching novel about hope and healing, and what it truly means to love for a lifetime."–USA Today  Before I Let Go, an all-new compelling second chance romance and the first book in the new Skyland Series from USA Today bestselling and RITA® Award-winning author @kennedyryan1 is coming November 15th, and we have your first look inside this epic romance! Their love was supposed to last forever. But when life delivered blow after devastating blow, Yasmen and Josiah Wade found that love alone couldn’t solve or save everything. It couldn’t save their marriage. Yasmen wasn’t prepared for how her life fell apart, but she's finally starting to find joy again. She and Josiah have found a new rhythm, co-parenting their two kids and running a thriving business together. Yet like magnets, they’re always drawn back to each other, and now the
Post a Comment
Read more

Rush by Emma Scott My rating: 4 of 5 stars View all my reviews
Post a Comment
Read more

Review: The Year We Fell Down

The Year We Fell Down by Sarina Bowen My rating: 3 of 5 stars View all my reviews
Post a Comment
Read more
More posts